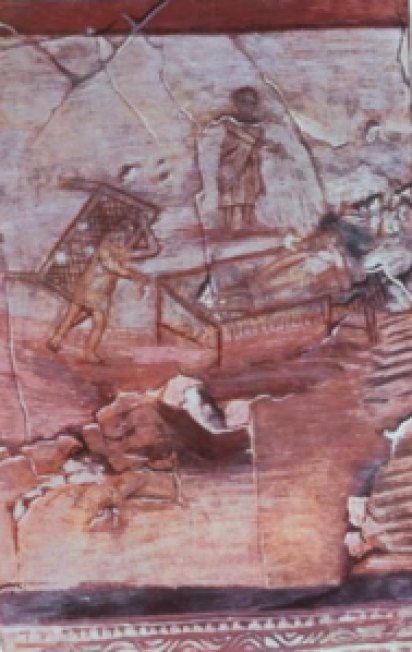 Wall painting from a Syrian house church, showing the healing of the paralysed man.

Sometimes, I come across an idea or image that is so remarkable, so fresh and new (to me) that it just has to be shared.  This one is hardly new (it dates back to the late second century), but it is startlingly fresh, remarkable and new – to me.

I have been trying to research a number of themes from the history of the early church.  While reading Ivor Davidson’s “The Birth of the Church:  From Jesus to Constantine AD 30 -312”, I came across a passage which had nothing to do with the subject(s) I was investigating, but which I want to spread.

The context is a Chapter on Christian worship.  After some discussion of the regular practice of community Eucharist on Sunday morning and Agape (“love feast”) on Sunday evening, he goes on to discuss the practice of regular fasting, prayer and praise. Services of “praise” incorporated psalms and hymns of praise into other Bible readings, as in the Divine Office.  Davidson then goes on to refer to a less familiar from of praise for worship, lost for centuries and rediscovered at the beginning of the 20th Century. Originating in the church of Eastern Syria, these are Gnostic in flavour, but probably orthodox in origin. The hymn quoted, Ode 19 of the “Odes of Solomon”, introduces an exaltation on the original conception.  Davidson says the odes contain some “striking” language.  The imagery of the Trinity as presented here, in its description of the conception of the Son, is not just “striking”:  it slams one across the face with a force sufficient to shake up one’s brain, and with it all  preconceived ideas of Trinity, and also of God and gender.

I present it here without comment:  see what you think.

A cup of milk was offered to me,
and I drank it in the sweetness of the Lord’s kindness.
The Son is the cup,
and the father is he who was milked;
and the Holy Spirit is she who milked him;
Because his breasts were full,
and it was undesirable that his milk should be released without purpose.

The Holy Spirit opened her bosom,
and mixed the milk of the two breasts of the Father, ……

The womb of the Virgin took [it],
and she received conception and gave birth.

How’s that for a new idea?

Read the full, text, and other Odes translated by James Chattlesworth, here.