When Pope Francis earlier this month confirmed the “heroic virtue” of Pope John Paul I, he conferred on him the title “Venerable”, reminding us  of Pope John Paul II’s earlier declaration of him as a “servant of God” – the first step on the road to sainthood.

My interest in John Paul I is that there have been numerous suggestions that he may have been the first to speak up for pastoral support for gay couples – for example,  by permitting adoption by gay couples, or even for some form of recognition for same-sex unions.

My original source came from a post at  “The Gay Mystic, which I first wrote about some years ago. I’ve now done some more research, and found much more of interest. 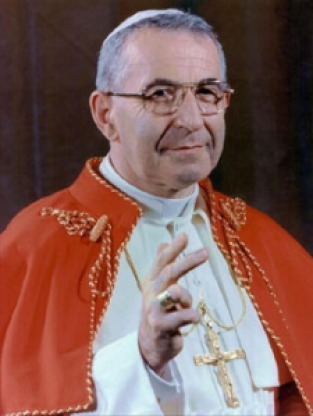 The original post at Gay Mystic, drawing on quotes from Wikipedia, describes how Albino Luciano (later Pope John Paul I) knew that sexual orientation is fixes and cannot be changed by conversion therapy; encouraged adoption by single people, even if these were homosexual; and encouraged Vatican cardinals to support loving and committed same-sex relationships. This was decades before we began to hear similar thoughts from other leading prelates, in just the last then years. The original quotations on Wikipedia have since disappeared. In an update to the original post, Gay Mystic reported

(Note: These quotes were removed from Wikipedia, August 15, 2009, then restored in an enlarged section, entitled, The Moral Theology of John Paul I. They are currently under review, awaiting confirmation through appropriate citations.)

Since then, they have disappeared completely. Wikipedia at present includes only a single entry on John Paul I and homosexuality, stating that he upheld the traditional line on sexuality, “A sexuality that is worthy of man must be a part of love for a person of a different sex with the added commitments of fidelity and indissolubility.” I have no way of knowing whether the WP verdict is a result of right-wing censorship of an uncomfortable fact, or whether the claims were simply false.

Fortunately, we do not need to depend on Wikipedia. A simple internet search throws up other sources. I found the same material on several websites and blogs, then traced the original text to “White Light, Dark Night – the revolutionary life of John Paul”, by Lucien Gregoire, which you can read on Google Books,. I quote extensively from this, because it is so important.

This passage shows how far he was ahead not only of the rest of the church, but even of secular society, in recognising the value of adoption by single people as well as gay couples . Unusually, he notes that in some respects, same-sex couples can be not just as good as heterosexuals, but even better (a conclusion that is supported in recent years by some academic research):

When an opposition member of the assembly challenged his proposal: “But, that would make it legal for homosexuals to adopt children,” Luciani responded,

“The desire to parent children is a basic human need. ..Until the day comes that we can guarantee basic human rights and dignity to the tiniest minority, we cannot truthfully call ourselves a democracy. “

Yet, his adversary objected, `But homosexuals have a record of splitting up after the `honeymoon’ is over and this would cause children to lose either one or both parents.”

Luciani responded: “There are two major forces involved in making for long term loving relationships and regardless of what Rome might believe, sex is not one of them.As a matter-of- fact, sex is most often a declining force in many relationships. It often has very little to do with the long term survival of a union. The longevity of a relationship of two people who parent children that is so important to protecting the rights of children until they reach adulthood depends not on sex, but rather on the two major forces that create long term relationships, love and companionship.

When one considers the latter, the homosexual has a great advantage. Two people of the same sex who fall in love with each other make much better companions of each other because they are more likely to share common interests. It is for this reason that children parented by homosexual couples are less likely to undergo the trauma of arguments in marriage and of divorce. “

His observation that there are instances where same-sex couples are willing to take on disabled or otherwise difficult children that others reject, has since been corroborated by many professional adoption case workers.

Very little is known of Luciani’s involvement with homosexual parents other than a few short notes written in connection with his orphanages, “We have found that homosexual couples will take handicapped and less than healthy and attractive children. Most importantly, they will take bastards. Heterosexual couples, on the other hand, go for the cutest babies as if they were shopping for a puppy in a pet shop. “

This belief in the value of gay parents seems to have been based observation from real life. This is telling:

“I have for many years counseled a young couple. They have great sexual attraction for each other, yet, beyond that they have nothing in common. I have yet to be in their presence when they have not been arguing between themselves or yelling at their children. In addition, they both suffer from a serious ongoing drug and alcohol addiction problem for which neither one has ever sought counsel. Both children, having been bombarded during their growing-up years by the incompatibility of their parents, are now confined to institutions. In that I sanctioned this marriage, I must live the rest of my days with this on my conscience.

`Last week, this same couple came to me on a matter of such great urgency that I had to cancel another appointment. They told me of a neighbor – one of the new single parents in Italy – who was a homosexual. As a matter-of-fact, another man has been living with him for many years.

“I have known of this queer relationship for sometime. Both men are contributing members of the community and spend much of their free time helping out in the parish orphanage. Their two beautiful children, a boy and a girl, are the envy of all who are privileged to experience them.

“One night as they were leaving, I noticed tears in their eyes. They told me, it grieves them that they cannot take all of the children home with them.

“Mama, it is this experience, more that any other, that has caused me to understand the qualifications of a good parent. There is something terribly wrong with a society that thinks that one’s sex is what makes one a good parent. “

As a result of his firm support for adoption by Vatican cardinals  that recognition of loving, committed same-sex relationships should be encouraged, because it is in the best interests of children who might otherwise not find adoptive parents.

The possibility of church support for civil unions

Just three months before his death, Pope Paul VI permitted Cardinal Luciani to address the Vatican cardinals on the possibility that the Church might encourage homosexuals to enter into long term loving relationships as they represented the only population group that was large enough and willing to provide economic and emotional support to millions of children who otherwise would be aborted by women too young or too poor to support them. Luciani argued that the Church’s traditional position exiled homosexuals from society, forcing many of them into lives of loneliness and despair. He argued the Church’s position was one of prejudice, as medical science had proved that sexual orientation cannot be changed and the Bible’s condemnation of homosexual acts was scant compared to its vast condemnation of heterosexual acts.

At the conclusion of the session, Luciani had been unable to convince more than a handful of his audience that the matter should even so much as be discussed. He thanked Paul for having given him the opportunity. He then turned to the Vatican cardinals and told them, “The day is not far off when we will have to answer to these people who through the years have been humiliated, whose rights have been ignored, whose human dignity has been offended, their identity denied and their liberty oppressed. What is more, we will have to answer to the God who created them. “

He also rejected outright the common assumption that homosexuals and pedophilia go together, When an  opponent tried to argue aginst gay adoption on the grounds that “Nevertheless, homosexuals are pedophiles. This will put children in great danger” , this was his reply:

“To begin with,” Luciani responded, “homosexuality has nothing to do with pedophilia; one is sexual orientation and the other is sexual perversion. Yet, in that most cases of pedophilia involve incest, we must consider the question. If our objective is to prevent pedophilia in adoption then the only logical action is to permit only homosexuals to adopt children who are only of the opposite sex. This would reduce incest to zero. If we permit heterosexual couples to adopt children, then children would be at risk. “

The impossibility of “conversion therapy”:

But that’s not all. Another area where he was way ahead of his time, was in recognition that sexual orientation is fixed, and that “conversion therapy” is simply not possible.

Forty years before the world’s psychiatric and medical communities came to the same conclusion, Luciani reasoned that sexual orientation could not be changed by therapy, that the ability to fall in love is a basic instinct.

Yet, as the psychiatric community tells us today, Luciani found that unlike sexual orientation, sexual behavior could be conditioned by therapy or other circumstances. He reasoned that there are two forces that drive a sexual act, love and lust. He knew when two people are in love, love tends to drive the sexual act and that when two people are not in love, lust tends to drive the act. He understood then what we are coming to know now; a homosexual male, for example, can be conditioned to have sex with a woman only by changing the motivating factor from one of love to one of lust. It is because he felt strongly that God’s children not be products of lust; he opposed this type of experimentation.