In Italy, the Catholic parties in the Senate are mounting a fierce battle to stave off the government’s introduction of civil unions for same – sex couples, but the Vatican appears to have decided not to back them – and allow the legislation to pass.

The report at Il Giornale notes that this is an apparent paradox, but shows how in fact, it is not. Some may find this news surprising, but it is not unexpected: I wrote about the possibility myself, in this post. To understand how this has come about, we need some clarification of key points. 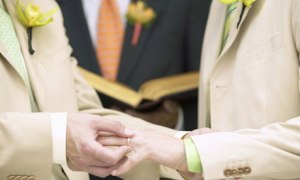 First, it is not true (as Gay Star News has claimed) that the Vatican has decided to “back” civil unions. That would be unthinkable, for a deeply conservative curia, and a major synod on protecting marriage and family is imminent, and where the question of LGBT ministry is already shaping up to be a major hot potato.  All that has happened (if the report is sound), is that the Vatican is facing some uncomfortable facts, and is beating a strategic retreat. If some form of legal protection is inevitable, it will not damage its reputation by fighting a losing battle. In stepping back, it hopes it will be left with the lesser of two evils.

In facing up to this inevitability, the Vatican has had to deal with some fundamental, uncomfortable facts of Italian political life.

This is not the first time that Catholic bishops have attempted to ensure civil unions as a lesser evil than gay marriage: they did so (unsuccessfully) in Portugal, and then Archbishop Bergoglio did so in Argentina, also unsuccessfully. Since then, numerous bishops, of ever – increasing seniority, have spoken out on some perceived value in civil unions.

Absolutely the last thing the Vatican wants, is a repeat of what to them was the nightmare in Ireland. The marriage equality movement continues to gain pace worldwide, notably including several countries that are heavily Catholic, at least in name: Belgium, Spain, Portugal, Argentina, Brazil, France, Ireland, Mexico, as well as others with at least a significant Catholic population – Netherlands, Canada, South Africa, Luxembourg, USA. In most or all of these countries where polling evidence is available,  it shows that ordinary Catholics are simply not in agreement with the Vatican opposition to gay marriage.

But there’s another problem, and this comes from within the Church itself, Much of the anti – marriage rhetoric comes across as simply anti – gay, in conflict with the clear Catechism directive to treat gay people with “respect, compassion and sensitivity”, that malice, in words or action, should be strenuously opposed, and that there is no room for unjust discrimination. In days gone by, these more supportive elements in the Magisterium were routinely ignored, but in the era of Pope Francis, that is no longer possible. Besides, even appearing to be anti – gay has since become simply counter – productive.

Il Giornale provides a useful insight into this. Not long ago, there was in Rome a major demonstration against gay marriage, under the heading, “Day of the Family”, which attracted huge crowds. This was widely presented as including strong Catholic participation and leadership, but it seems that the Vatican was in fact embarrassed by it. Recognising that the hostility and homophobia on display are in direct conflict with established Church teaching, it now wants to distance itself from the Catholic ultra – conservative right – what I call the “orthotoxic” Catholics.

And so – faced with the inevitable, it now seems that instead of throwing serious energy into a losing battle, the Church will simply sit back – and hope that the process concludes, as quickly as possible.

Thereafter, it can deal with the real problems facing the Catholic Church (poverty, injustice, global warming) and the family – which emphatically do NOT include same – sex couples aiming to join, and strengthen, the institution.

UPDATE: Steven Lovett, author of “Faithful to the Truth” and moderator of the Facebook group “Catholics for Gay Rights” has published an English translation on Facebook.

My Ministry is Valuable – So Fund Me!

2 thoughts on “Understanding the Vatican Surrender to Italian Civil Unions”