In Dublin next year, there is an intriguing opportunity opening up for LGBT Catholics. Are our advocacy groups paying attention?

For the World Meeting of Families in Philadelphia, USA based LGBT groups and their allies attempted to secure formal accreditation. Philadelphia however, is the seat of archconservative Archbishop Chaput, and they were deliberately excluded. In spite of this, the coalition established an informal, non-accredited presence, and did some great work making the case for acceptance and inclusion church, of queer families.

Among many notable interviews that Fr James Martin has done about the impact of this book, “Building a Bridge” on finding a path to full inclusion of LGBT Catholics in the life of the church, is one done with Giacomo Sanfillipo, at Orthodoxy in Dialogue, a website that is pursuing much the same aims for Orthodox  Christians. 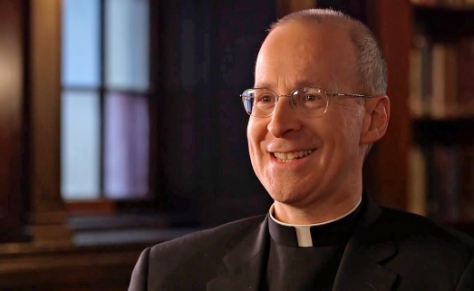 Much of the discussion will be familiar from other interviews and reviews elsewhere. However, I was struck in particular by Fr Martin’s concluding observation, on the value of  spirituality and prayer, to both sides in this debate.

It is certainly my own experience that a grounding in spirituality and prayer is the strongest possible defence against any potential harm from Vatican doctrines or hurtful rhetoric from misguided bishops. When one is struggling with messages from the institutional church, I find that it is always best to apply direct to the source of Christianity, in prayer and biblical reflection. One thing we can be sure of, is that however much it may seem that the church rejects us, God never does.

FATHER JIM: One thing that has surprised me, and even baffled me, is that most reviewers have completely ignored the entire second half of the book. The invitation to dialogue, which we’ve been talking about here, is only the first half of the book. The second part is a series of Scriptural meditations and reflection questions designed to help LGBT people reflect on their relationship with God, with the church and with themselves. So it’s surprising that very few reviewers bothered to review the whole book. It really is the most remarkable thing. When have you ever heard of reviewers only reviewing one half of a book?

Now why is that? I’ve been thinking a lot about why that is.On the secular left, perhaps they simply cannot enter into any sort of conversation about spirituality, or they think that spirituality is useless. You know, if you don’t believe God exists, then it’s going to be hard to appreciate an invitation to prayer. On the far right, perhaps they cannot admit that these passages might have something new to say to them about LGBT people. When I’m feeling in a darker mood, I wonder if it’s because a few on the far right, even in the church, feel that LGBT people can’t have a spiritual life. Or that they don’t deserve one. Or maybe, on both sides, on the far right and the far left, people are more comfortable with debate than they are with prayer.

“Telling our stories” is important because our experience directly contradicts the absurdities contained in official Vatican doctrines.

For example, the CDF “Letter to the bishops on the pastoral care of homosexual persons” consistently presents a false dichotomy, in which heterosexual relationships are described as loving, conjugal, mutual  self-giving, but the same-sex counterparts are seen as no more than indulgent self-gratification.

This is patently absurd. It should be obvious to anyone paying attention to the real world, that many heterosexual encounters are also no better than self gratification, or otherwise fall short of the noble ideal of loving, mutual self-giving. Conversely, the experience of many lesbian and gay Catholic couples shows very clearly that our relationships too, can be fully loving, mutual self giving.

Increasingly, some Catholic bishops are coming to understand this. During the 2015 bishops synod on marriage and family, Cardinal Christoph schonborn of Vienna described one gay couple he had come to know, and how their relationship was demonstrably about love and mutual support. As Fr James Martin SJ reports in his book Building a Bridge,

Around that time, Cardinal Schönborn spoke of a gay couple he knew who had transformed his understanding of LGBT people. He even offered some qualified praise for his friend’s same-sex union.

The cardinal said: “One shares one’s life, one shares the joys and sufferings, one helps one another. We must recognize that this person has made an important step for his own good and for the good of others, even though, of course, this is not a situation that the church can consider regular”.

It should come as no surprise that Cardinal Schonborn and others like him who have first hand knowledge of lesbian and gay couples, are in the forefront of Catholic leaders promoting improved pastoral support for LGBT Catholics, even to the extent of support for same sex unions. In the Protestant churches there are countless examples of pastors who have come to support gay marriage after conversations with gay couples in their congregations, which have shown them that these relationships have much in common with those pastors’ own marriages.

Telling our stories is furthermore important to bring home to our church leaders just how much existing doctrines are not merely misguided, but are also downright hurtful and damaging.  There is abundant statistical evidence that LGBT youth in particular have much higher rates of suicide, self harm and substance abuse than their straight peers. They are also more  likely to run away from home, and then perhaps to fall into prostitution as a means of simple survival. Furthermore, there exists solid research evidence that to some extent at least, these difficulties faced by LGBT youth are aggravated by real or perceived  church teaching and practice.

For still others, our stories tell of how the desire to comply has led us into inappropriate and ultimately destructive heterosexual marriages, or to simply walk away from the church entirely. Both of these are part of my own story.

In “Building a Bridge”, Fr James Martin S.J. expands on the established Catholic teaching that Catholics must show “respect compassion and sensitivity” to gay people, by pointing out that this is impossible without first listening to us and our stories. That, in turn, is impossible unless our stories are out there to be heard.

WHY Our Stories Matter

Our Stories As “Sacred Texts”.

Much has changed for LGBT Catholics since I first began this site, nearly nine years ago. In the institutional church under Pope Francis’ leadership, there’s been a marked shift to a more pastoral tone, to replace the harsh rhetoric under Pope Benedict XVI. At the Bishops’ Synod on Marriage and Family, even some conservative bishops acknowledged that the time has come to discard the “disordered” language in official teaching, some others even expressed apologies for the past harsh treatment of our community. In many Catholic countries, laws have been enacted to recognise same-sex marriage or civil unions. In response, an increasing number of bishops have come to recognise the value of legal recognition and protection for same-sex couples, even if not yet for full marriage. Under the radar, a much smaller number of bishops and other clergy are coming to support church blessings for these couples, to celebrate their civil marriages or civil unions.

Formal doctrine has not yet changed substantially, but there was some welcome movement in in Pope Francis’ “Amoris Laetitia” from the previous hard-line insistence on “objectively sinful” acts, to an emphasis instead on pastoral accompaniment, discernment, the “interior forum”, and respect for personal conscience. There was even some veiled suggestion that for innately homosexual persons, what is “objectively” sinful viewed in the abstract, may well be subjectively good, in the personal context – a point that goes right back to St Thomas Acquinas, as described by the French Dominican theologian Professor Alain Thomasett SJ END_OF_DOCUMENT_TOKEN_TO_BE_REPLACED

For some useful material on the  Vatican’s attacks on (so-called) “gender ideology”, see the special issue on the topic at the on-line journal Religion and Gender, under the title Habemus Gender! The Catholic Church and ‘Gender Ideology’.

Describing itself as “the first online, peer reviewed, international and open access journal for the systematic study of gender and religion in an interdisciplinary perspective”, this issue lives up to the claim with a range of articles from respected writers with differing backgrounds and geographic perspectives. As a South African, I am particularly concerned that some of the harshest rhetoric has come from African hierarchs – and so delighted to note that one of the articles is a specifically African response by Kapya Kaoma.

There is also an important interview with Msgr Krysztof Charamsa, and additional material by writers I am familiar with are by Tina Beattie, Mary Hunt and Mark Jordan – as well as much by others not yet known to me.

Gender and the Problem of Universals: Catholic Mobilizations and Sexual Democracy in France (Eric Fassin)

Against the Heresy of Immanence: Vatican’s ‘Gender’ as a New Rhetorical Device against the Denaturalisation of the Sexual Order (Sara Garbagnoli)

The Sin of Turning Away from Reality: An Interview with Father Krzysztof Charamsa (David Paternotte,Mary Anne Case, Sarah Bracke)

Gender and Meaning in a Postmodern World: An Elusive Quest for Truth ( Tina Beattie)

‘Theologies’ and Contexts in a Latin American perspective (Sonia Corrêa)

The Vatican and the Birth of Anti-Gender Studies (Elżbieta Korolczuk)

How are Anti-Gender Movements Changing Gender Studies as a Profession? (Andrea Pető)

Review of Joanna Mishtal, The Politics of Morality. The Church, the State, and Reproductive Rights in Postsocialist Poland (Dominika Gruziel)